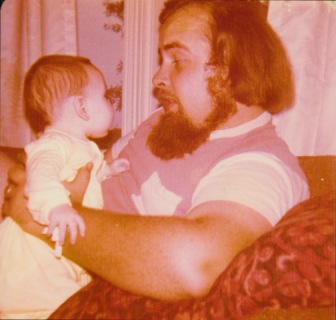 Every Sunday morning at the Keck house, an epic battle was waged. No, it wasn’t my parents trying to drag my sister and me out of bed; we were up at the crack of dawn eating generic puffed rice (gag) and sitting in front of the TV watching the Three Stooges and wrestling. You know, like kids do.

The struggle started as soon as my mom woke up. “Go comb your hair, girls.” Jenny and I would pretend not to hear her the first time. And the second time. But Mom’s third request was usually accompanied by a swift twist of the TV set knob. Talk about a throw-down.

In his khaki pants and freshly ironed dress shirt, my dad would eat pancakes and drink coffee while my sister and I fought over what to wear to church. All bickering stopped, however, as soon as we heard our dogs barking at my grandma and grandpa’s car as it rolled up the driveway. Jenny and I would race to the door, because being left behind meant going to the laundry mat with Mom.

At church we had a very serious decision to make: go to “church” church with G&G or help Dad out in his Sunday school classroom. Jenny always seemed to pick one or the other with no problem. I, on the other hand, struggled with the decision every week. I knew I should want to go to church with my grandparents, because people would say things like, “Time with your grandparents is precious; they’re not going to be around forever, you know.” (Which was a little mean, don’t you think?) But what I really wanted to do was hang out with my dad. And usually, after a dramatic and completely unnecessary inner struggle, I did. 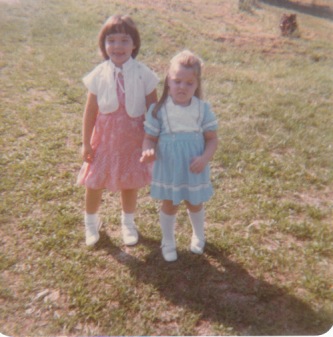 the Keck Sisters, Julie and Jenny

Dad had started volunteering in for the Sunday school before I was even born, first keeping tabs on the younger children of his parents’ friends, then his peers, and, eventually, kids of some of the kids he’d watched as toddlers.

The routine was always the same. First, Drop-Off Time (aka Crying Time). Most kids toddled right in to play with the donated toys, but a few immediately burst into tears as soon as their moms and dads were out of view. Parents of those kids often poked their heads back into the room, but my dad always waved them away. If the criers wanted gushing or doting, they were out of luck. My mountain of a dad would scoop them up and let them hang out in the crook of his meaty arm while he proceeded to completely ignore their hiccupy tantrums. Dad would talk to other kids (the non-criers), build amazing Play-Doh animals with one hand, and only check in with his new best friends once the sniffling had stopped.

Part of the reason this move worked was because the kids wanted to play with the Play-Doh and partly because my dad looked like Santa Claus. Kids who had just graduated from the 1-yr old room would often spend their first few days with my dad staring at him. Soon they’d work up the nerve to touch his fluffy grey beard, pinch his red nose, or even poke his big belly. He knew what the kids were thinking, and he never tried to correct him. Even now when a little one eyes him from across a crowded restaurant, my dad will raise one eyebrow and nod very slowly, reducing the kid to wide-eyed wonder.

Play Time ended with Clean-up Time, which lead swiftly into Story Time. My dad would perch on a tiny chair that really should not have held his weight, possibly still with a pensive crier on his arm, and read a short Bible story from a colorful picture book. Whether there were 3 kids in the room or 20, my dad would quickly have them in a trance. His warm and soothing voice would have put them to sleep if there’d been mats to lay on.

After Story Time came Music Time, during which Dad would lead the kiddos in a series of animated finger plays, including “Tick-Tock, Tick Tock” and (for the more advanced) “Itsy-Bitsy Spider.” As soon as he finished one song, one of the older 2-yr olds would yell out another one, eager to keep the show going. From the back of the room, this crowd was hilarious and wonderful: a massive man on a tiny chair leading a crowd of ankle-biters in song. My dad was the biggest rock star on the Sunday school circuit, and more than one kid had a breakdown when it was time to move up into the 3-yr old room.

The hour always flew by. A few minutes before church let out, my dad would get all of the kids to sit at little round tables to receive their own kid-sized communion. Two or three Nilla Wafers or Saltines + a tiny cup of Hawaiian Punch or Kool-Aid. Then parents started to trickle in (the younger parents first) to retrieve their red-mustached, sugar-boosted kids. Most were carried from the room still pointing at my dad. The cutest part? Hearing tiny voices saying “Henry” all the way down the hallway and out the door.

Julie Keck was born and bred in Southern Illinois about 20 miles from St. Louis and just high enough on the bluffs that she could see the St Louis Arch from her grandparents’ back yard.  She’s lived in Chicago for the past 10 years but still misses the Arch.  Julie is a freelance writer and film maker whose latest screenplay, TILT, is slated to be directed by Phil Holbrook in Minnesota this fall.  TILT is a dramatic thriller set in Brainerd about a father trying to reconnect with his daughter and set things right after an unthinkable event.  Julie writes with her partner Jessica King under the name King is a Fink.  They also produce short films, several of which are currently on the film festival circuit.  For more information about TILT, go to www.Tiltthemovie.com.  To learn more about other King is a Fink projects, check out kingisafink.com.