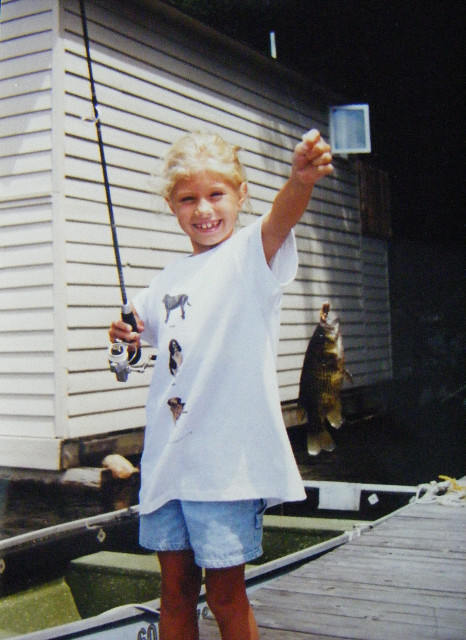 We caught a fish as long as my arm that weighed about 13lbs!

Do you remember when I’d write you poems like these for Father’s Day?
And I was probably about 7 years old
Dancing around when you’d come home from work…

Ever since I was young, I have loved going on fishing trips with my dad, even if it meant getting up at 6AM. It’s been a few years since we’ve gone, but I still remember how to cast and reel in a catch, so I think we’ll be okay.

For years my Dad took me to the Outdoors show, and fishing competitions just to spend some time outside with him. I remember the times I’d cast my line and hit a rock, and quietly wait to mention something, until he’d look over and laugh saying “I don’t think you’re line is strong enough to reel that rock in”. Countlessly untangling my fishing line, and unhooking the fish I’d caught brought us together, and we became voyageurs of the seas! (errr… Georgian Bay).

The moment I will never forget is at a fishing competition we went to when I was about eleven. We set up our chairs on the dock and put the fresh bait on the hook, ready to reel in that $1000 trout! A couple of hours had passed by, and I was so frustrated that we had not even had a nibble on our lines, I started to complain and wanted to go home. My dad insisted we stay for a little bit longer, because it was a nice day and we had nothing to rush home to. After about an hour of pouting I fell into a deep sleep, with my hat over my eyes.

KIMMY! I awoke abruptly to my dad hovering over me trying to grasp my rod, there it was, the big bite we had been waiting for! I was so startled and quickly my Dad and I brought in the fish together. It was huge to me, probably weighing about 13 pounds, I was grinning from ear to ear as we brought him in and up on the dock. My dad could not believe I had fallen asleep and managed to catch a trout, because he didn’t even get one. I bragged the entire ride home, claiming I was just a natural, and the fish gravitated to my fishing approach, he just smiled.

It seems like many years ago, but I still remember it vividly. It’s the moments that are spontaneous and unplanned that make for the best memories. And by the way, it wasn’t the $1000 trout we’d caught, but we didn’t care.