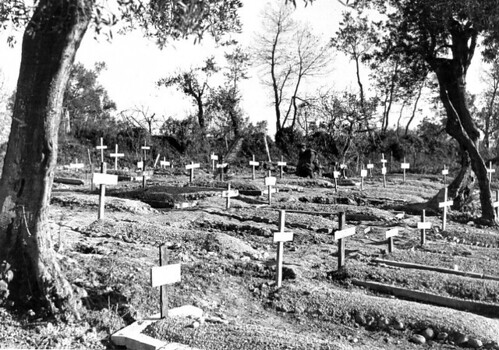 Graves of personnel from the Edmonton Regiment killed in the battle of Ortona, 7 January, 1944.

We pause to honour the fallen on Remembrance Day

“The lessons learned from these terrible conflicts must never fade from our collective consciousness,”

My generation grew up in a world that was oblivious to war. To us, war was something that happened a long time ago on another soil between people we will never know. Our parents used to tell us stories of what it was like to grow up during the war, TV and the movies brought us the visuals. Hogans Heroes, the Great Escape, the Battle of the Bulge. Frightening as it seemed on TV, we could never imagine the horror of ever having to endure something like that. The brave and gallant men and women who stepped up to the plate, swallowed the risk and ventured off on their own free will to defend our rights and freedoms on foreign soil. Many never returned, many returned home injured or maimed for life. All had made the ultimate sacrifice so future generations would not have to live in fear, would never have to know such violence and death. The ones that died had given up their lives and made it safe for us to feel that way. It was as if that kind of thing could never, ever happen again, and certainly not on our own soil let alone that of another civilized nation in Europe or anywhere.

Recent history has proven that theory wrong. It astounds me that we still find our sons and daughters, brothers and sisters, mothers and fathers going off to fight wars in foreign countries—even if the premise is to protect the rights and freedoms of those that are left behind in the comfort of home. The supposed threats of today pale in comparison to the threats of Hitler’s aggression in 1939.

And yet all over the world, young men and women are out there, becoming the heroes and veterans of tomorrow. In Iraq, and Afghanistan, they are out there fighting wars that many of us do not agree with. The numbers are fewer, but the stories are just as humbling. For some, they come home to a life of opportunity and the prospect of a life full of promise and prosperity. For many, the story is not so bright.

In 1945, returning veterans were hailed as heroes, and had nothing but a world of opportunity ahead of them. Today, those that are returning from the theatre of war are returning to a completely different reality. Beyond the obvious physical traumas, broken bones and severed limbs, there lurks a much darker set of problems, the depth and severity of which no one really knows and may only present itself over time. Post traumatic stress and the effects on the individual and the families that live with these veterans is largely overshadowed by the politics of the day. Day by day, thousands of men and women around the world are heading into a tailspin and a common complaint is that the very system they put their lives on the line for, is not giving them the support they need in return now that they are home. This is happening in Canada, in the US and in other countries all over the world.

Today we take a few moments to honor and thank those that fought for our freedom. We remember those that died, and honor their sacrifice. Those who were not so lucky to return home and those that did. But after today, the women and men who come home from Iraq, who come home from Afghanistan, those who have come home injured, have to go back to their own realities. Home to fight their own battles. Home to heal the physical wounds, the psychological scars, the emotional traumas. Home to fight for survival, to get better, to find their place in the world they have returned to, and in many cases, they have to do it on their own, without the support you would think they have earned and would be entitled to.

Here in Canada, we hear a lot about veterans coming home and disappearing into the fabric to suffer alone and it is a terrible shame. Embarrassing really. Politicians are quick to use the rhetoric about heroes and bravery and defending our freedoms etc when it is convenient for their purposes and helps them get elected, but when it comes to giving them the respect and post theatre benefits they deserve, too often they fall way short.

So today, we remember and honour our fallen brothers and sisters, mothers and fathers, sons and daughters from wars gone by—but also, we take a moment to honour the fallen soldiers and the surviving veterans from recent wars as well. We wish the injured, the traumatized and the maimed the courage and the strength to overcome their challenges, whatever they may be…