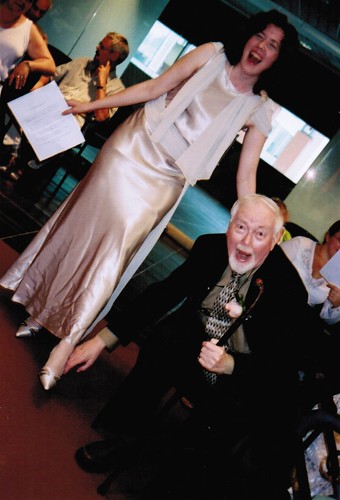 On January 25, 2007 I lost my father, Christopher Davies, to spinal cancer. I think about him often, usually at times in my life when I don’t know what to do in a difficult situation and at times when I’d normally turn to him for his help and wise advice. Times like now.

He was the chief negotiator at the Toronto Star for nearly twenty five years and was known for conducting collective bargaining in high style and with humour. And always great food would be part of it. He’d likely make my worries more bearable by saying something very Billy Bragg, like “Kid, you’ve gotta learn to take the crunchy with the smooth.” But it would hardly be a tribute to his memory if I sent out a cosmic cry for help, especially on Father’s Day. My worries will still be there tomorrow.Anyway, I’d rather share a happy memory that would make him smile. This one is about the day my father finally unloaded his forty year old daughter.

Although he fought his two year battle with spinal cancer with tremendous courage and strength, it became clear at a certain point that my father was living on borrowed time. Our focus became quality of time rather than quantity. What could I do that would make my father truly happy? My partner and I talked at some length and decided formalize our relationship. My parents had always worried that I would never marry – I’d pretty much accepted that this was entirely possible, warty troll that I am – and that was OK. But against all odds, Frank came into my life and turned out to be a keeper who happened to like warty trolls. I knew that it would give my father tremendous peace of mind to know that I had someone to take care of me. I just didn’t want to raise a glass at my wedding one year later and say, “If only my father were here to see this.” The time to set things in motion was now.

So we planned a hasty wedding, while he was well enough to attend. It was a simple civil ceremony in Welland, followed by a nice luncheon. My father made the most touching speech, entitled “Just a Word of Love”, which I share with you now. He said, “It is hard to express the love and pride that I feel. Today is so very, very special, so full of happiness. My heart overflows with gratitude that I have been spared to see the day when my lovely, talented daughter has entered into the blessed state of matrimony. I don’t just speak for myself but for Helene who left this world too soon. She would have been so proud and happy. I am particularly pleased that Helene got to meet Frank and saw the goodness in him as I do, knowing that he will take such good care of Angelique. You are both special and may God bless both of you. May the love that you have for each other keep you warm on winter nights and cool when the sun beats down. May the good Lord bless and keep you both, now and forevermore.”

It was truly the happiest day of my life and I’m glad that my father was a part of it, and that the memory of it will sustain me, even on the dark days. I miss my father, but I know he’s always with me.

To others who are missing their fathers today, I hope your happy memories see you through.